I want your predictions for where we'll be in ten years' time, June 2026, by which time there should have been at least two general elections (unless things have gone really badly wrong). If you think the UK will have split up, then references to the UK should be taken to mean the successor state with the highest population.
Poll #2048024

Open to: All, detailed results viewable to: All. Participants: 30

Will the UK have left the EU?

The UK's relationship with the EU will include

The UK will include:

The UK government will be

The worst Prime Minister of the past century will be:

It now seems clear that the governance of the Iron Islands derives from a mis-reading of Monty Python and the Holy Grail. ( Collapse )

In other news, I have celebrated the arrival of summer by turning the heating back on.

Does anyone want a Kindle Keyboard (aka Kindle 3)? I have a Kindle Voyage now, and the old one doesn't seem to be worth enough to justify the bother of listing it on eBay. It's the wifi only model, dark grey, and in perfect condition as far as I know. Cover included if I can find it. You'll need to supply your own charging cable -- I forget if it's mini-USB or micro-USB. Recipient collects, but that can be at Eastercon in a couple of weeks.

Our home phone line is currently down, so no Internet, and the mobile data coverage at home is not up to doing more than Twitter. So don't expect to see us online much for a couple of days.

This is really quite amusing. A tech website held a race between two London taxi apps — the (in)famous Uber and my former employer Hailo. The race was from Kings Cross to Covent Garden, which is only about a mile and a half, and Hailo beat Uber by 45 minutes. The Uber passenger could almost have walked to Covent Garden and back in the extra time that his journey took compared to Hailo.

By convention, the Prime Minister is the leader of the majority party in the House of Commons (assuming there is one). But the Prime Minister is really whoever can command the confidence of the House, and the convention only exists because that's probably going to be the leader of the majority party. If there were a situation where the leader of that party did not have the confidence of the House of Commons, then he would cease to be Prime Minister, and someone else would have a go at forming a government. He would be expected to resign immediately as party leader, but there's nothing requiring him to do so.

So does this also apply to the Leader of the Opposition, a question which may be relevant in the near future. Is the Leader of the Opposition necessarily the leader of the largest party that's not in government, or is it in fact whoever can command the support of the majority of MPs from that party, which may not necessarily be the same? In other words, is it up to the Labour party as a whole or just the Parliamentary Labour Party to decide who it is? If Labour had a majority, then it would definitely be a matter for the PLP and not the party at large to decide who was Prime Minister.

That British Memeplex
1. Marmite—love or hate?
Only on Twiglets
2. Marmalade—thick cut or thin cut?
Thick.
3. Porridge—made with milk or water?
Milk.
4. Do you like salt, sugar or honey on your porridge?
Golden syrup.
5. Loose tea or teabags?
Don't drink camellia sinensis, generally teabags for fruit/herbal teas.
6. Where on your door is your letterbox?
At the bottom of the drive.
7. What's your favourite curry?
Something from the Ambrette in Canterbury or Planet Spice in Croydon.
8. What age is the place where you live?
Mid 1950s.
9. Where do the folks running your local corner shop come from?
There's no local corner shop.
10. Instant or fresh coffee?
Don't drink coffee.
11. How far are you from the sea?
Just under 8 miles.
12. Have you travelled via Eurostar?
Yes, but more frequently by the Eurotunnel car shuttle.
13. If you were going to travel abroad, where's the nearest country to you?
Le Gris Nez near Calais is 30 miles away.
14. If you're female (or possible even some males) do you carry a handbag?
No, but I have a laptop rucksack that I often take with me if travelling.
15. Do you have a garden? What do you like growing?
An uncomfortably large garden. We're still working out what we like growing, but we have lots of tomatoes and tomatilloes this year.
16. Full cream, semi skimmed or skimmed?
Semi-skimmed, or unpasteurised whole milk direct from the dairy farm down the road.
17. Which London terminal would you travel into if going to the capital?
St Pancras International.
18. Is there a local greasy spoon where you live?
There isn't a local anything where I live.
19. Do you keep Euros in the house?
Yes, and also a plastic Euro coin for the supermarket trolleys at Auchan in Coquelles near Calais.
20. Does your home town have a Latin, Gaelic or Welsh alternative.
Not sure if this is where I grew up or where I live, but it's yes to both: Grew up in Deva and live (just) in Durovernum.
21. Do you have a well known local artist or author?
Henry Moore used to live in Marley, and Ian Fleming lived in Pett Bottom.
22. Do you have a favourite Corrie character?
I have never watched Coronation Street.
23. Are your kitchen sink taps separate or a mixer?
Three-way mixer, with filtered water as the third option.
24. Do you have a favourite brand of blended tea?
There's a nice fruit tea that we've picked up in Bruges a couple of times.
25. What's in your attic if you have one?
Spare roof tiles and insulation. And there have allegedly been bats, but not since we moved in.
26. If you go out for a cream tea, what jam do you like on your scone?
Strawberry.
27. Talking of scones—scon or scown? Jam or cream first?
Scon, jam first.
28. Barth or bath?
Barth
29. Carstle or castle?
Carstle
30. What flavour of crisps do you favour?
Cheese and onion, preferably of some posh variety like cheddar and chive.
31. If you go to the chippie, what do you like with your chips?
Sausage.
32. Take away, take out or carry out?
Take away.
33. If you have one, what colour is your wheelie bin?
Green for garden waste, black with blue lid for recycling, black with black lid for landfill.
34. What colour skips does your local skip hire use?
Yellow.
35. Do you celebrate Guy Fawkes?
No.
36. Dettol or TCP?
Neither.
37. Do you have a bidet in the bathroom?
No.
38. Do you prefer courgettes or aubergines?
Aubergines.
39. In the 'real world', do you have friends of other nationalities? Which nationalities?
Irish, American, Canadian, Australian, Kiwi, Swedish, Finnish, Dutch. And Raf next door is French.
40. Do you have a holy book of any sort in the house?
Probably a couple of bibles.
41. Do you prefer a hankie or tissues?
Tissues.
42. Are you a fan of crumpets? What do you like on them?
Only if I made them myself, with butter.
43. Doorbell, knocker or both?
Dodgy battery-powered wireless doorbell.
44. Do you own a car? What sort?
Honda CR-V.
45. What sort of pants do you guys prefer? Y fronts or boxers?
Y-fronts.
46. Anyone still a fan of suspenders?
Assuming we're talking about braces here, then no.
47. Do you have a favourite quote from the bard?
No.
48. Do you like toasted muffins?
Again only if I've made them myself.
49. Do you think a traditional trifle should contain jelly?
Yes.
50. Do you attend regular religious worship? Of what kind?
No.

So, England has 35,000 square miles of countryside. How much would you say that it needs for farming, wildlife habitats, recreation, scenery, and all the other things for which we need open space? That's a fairly fundamental question while we're deciding how much of it we can afford to build things like houses on. Do we need 35,000 square miles? Would 33,000 square miles be enough? Or 30,000 square miles? Or do we perhaps need more than the 35,000 square miles that we've got? Think about your answer for a bit before moving on to read the next paragraph, which is behind a cut tag.

Jonny went off to his new home yesterday morning, very smoothly. They've sent us a few photos, and here he is making a new friend. 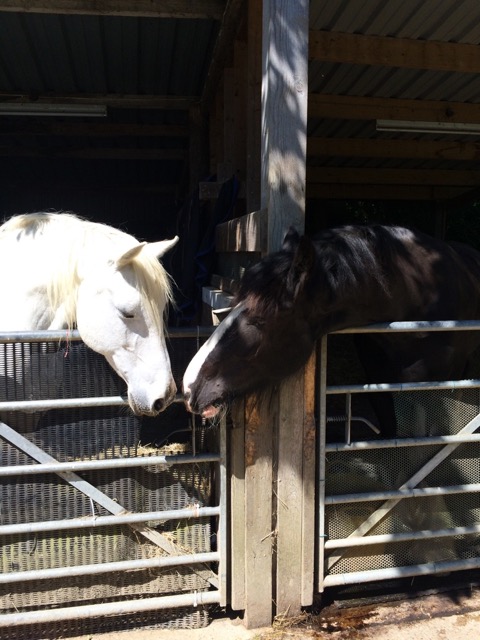 Angelo spent a while calling for him, but then he seemed to settle down and started eating the grass, so it seems like he'll be OK.
Collapse